This is a post to highlight a typical pattern which Venture Corporation exhibits in the period August to Dec. If you buy into the idea, look for the suggested entry and exit points at the end.

This first picture is the share price of Venture Corporation in 2008. 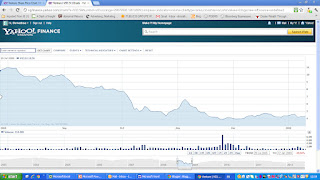 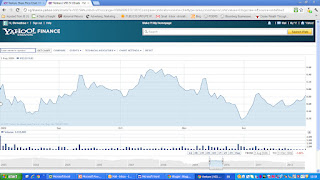 In 2009, when every stock and its grandfather was soaring away, Venture Corporation managed to lose 2%. 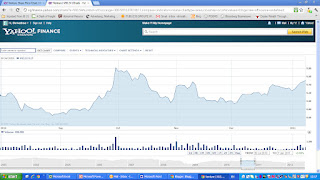 In 2010, Venture managed an outstanding 4% increase in share price, as seen above. 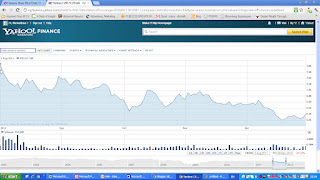 2006 was the year this bucked the trend of a drop with a nice hefty 21% gain, a rarity for Venture in the last seven years.

The average gain (Loss in this case) is around 11%.

Venture is trading at 7.41 at the time of this post.

If you are terribly pessimistic and feel this is like 2008 all over again, then buy it when it reaches 3, actually, aim for 3.1-3.2. The predicted chart value is 3.

My guess for what it is worth is that it will trade down to around 6.6-6.81 by December.

I would want to buy Venture any time it trades below 6.81.

Now, that is a good attractive entry point for me.

In terms of exit point, look for an exit around 8.4 to 8.6 between April to June of next year.

Full Disclosure : I am neither long nor short Venture at this time

This post is to review the trading idea on SATS posted on May 14. 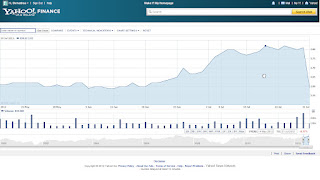 The reason for the trading idea was the belief that there will be a special dividend.

That turned out to be true and the total dividend declared was 21 cents against the 12 cents the previous year.

So, we can award me 1 point for guessing that there was a special dividend.

The estimated price it would reach was 2.96.

All in all, if you had followed the idea, you would have made 10%.


This is a link to the trust

From the web-site, K-GREEN TRUST is a business trust with an investment focus on "green" infrastructure assets in Singapore, as well as Asia, Europe and the Middle East.

The Trust aims to provide long-term, regular and predictable distributions to its Unitholders.

It is a bit early to look at the long term picture.

However, i have made an attempt to see its value.

Largely, some of this is due to the pay out from the NAV.

I have projected that the NAV will decline by anywhere between 1.9% to 3.6% over the next twenty years.

The DPU has been projected to grow by 5% per year.

These two combine to give a value of 1.49 for the trust.

Full disclosure: I am long this stock

Every investor would love to stumble upon the perfect stock. But will you ever really find a stock that provides everything you could possibly want?
One thing's for sure: You'll never discover truly great investments unless you actively look for them. Let's discuss the ideal qualities of a perfect stock,
The quest for perfection
Stocks that look great based on one factor may prove horrible elsewhere, making due diligence a crucial part of your investing research. The best stocks excel in many different areas, including these important factors:
· Growth. Expanding businesses show healthy revenue growth. While past growth is no guarantee that revenue will keep rising, it's certainly a better sign than a stagnant top line.
· Margins. Higher sales mean nothing if a company can't produce profits from them. Strong margins ensure that company can turn revenue into profit.
· Balance sheet. At debt-laden companies, banks and bondholders compete with shareholders for management's attention. Companies with strong balance sheets don't have to worry about the distraction of debt.
·  Money-making opportunities. Return on equity helps measure how well a company is finding opportunities to turn its resources into profitable business endeavors.
· Valuation. You can't afford to pay too much for even the best companies. By using normalized figures, you can see how a stock's simple earnings multiple fits into a longer-term context.
· Dividends. For tangible proof of profits, a check to shareholders every three months can't be beat. Companies with solid dividends and strong commitments to increasing payouts treat shareholders well.


If your stock gets a ten on ten, you are almost guaranteed to have the perfect stock.

This link below gives you a link to Motley fool, from which this article is copied.

Dividend Stocks and REITS are not a substitute for Bonds

With interest rates being so low,  investors are not getting the interest income they need from their fixed income portfolio.


As a result, the advice of experts is to turn to riskier REITS and other  assets, such as high-dividend stocks.


While these investments may look attractive, historically they haven't been a good solution.

The main role of fixed-income assets in a portfolio should be to reduce portfolio risk to the level appropriate for the investor's unique circumstances.

Jared Kizer has done a study on this.

His findings confirm that  these strategies tend to dramatically under perform high-quality fixed income assets when market risks show up.

Stretching for yield -- whether in the form of dividends from common stocks or  interest on junk bonds or REITS-- is a bad idea.

The historical evidence demonstrates that these risks haven't been well-rewarded, and their returns haven't mixed well with stocks in a portfolio

http://blogs.barrons.com/incomeinvesting/2012/07/25/advisors-shifting-toward-less-traditional-income-investments/
Posted by Vatsa at 2:56 AM 2 comments:

There is a lot of interest in REITs among investors.

This is also fanned by articles in the newspaper highlighting that REITs have delivered a higher return for investors over the last decade or so.

As an intelligent investor, you would imagine by now where I am heading.

By and large, any trend which is worth highlighting in a newspaper is almost sure to be a dying or dead trend.

I have nothing against REITs per se, just saying.

As an academic exercise, i pulled out the numbers for Ascendas REIT over the last five years and examined it carefully for its value.

As you can see, the current price is higher than intrinsic value. So, if you were buying now for the yield of 6% or so, that it seems to offer, my word of caution is that you are overpaying and be careful.
Posted by Vatsa at 10:21 PM No comments:

There are two potential approaches to estimating the value of Rotary Engineering.


This is Rotary Engineering, reduced to numbers and cents, above.

An estimate of its value derived from owner earnings, indicates that one share is worth 58 cents.

The other approach is its dividend payout.

One last look, which is a very optimistic view of it is to project a longer term ROE.

This provides a value of 99 cents per share as on date.

So, there you have it, Rotary is worth anywhere between 48 cents to 99 cents per share.

I would be a definite buyer at current prices of 53 cents per share.
Posted by Vatsa at 6:14 PM No comments:

I have just added on to my position on Wilmar.

The entry price after commissions is 3.69.

The expectation is that this will deliver a 30% return by the same time next year.

I will review this after six months to see whether this was a right move.
Posted by Vatsa at 1:58 AM No comments: