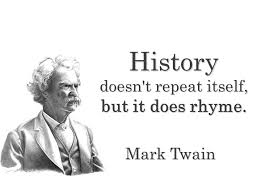 This post is to outline a trading idea on Metro Holdings Ltd (M01.SI on Yahoo Finance)

Here below is a look at Metro over the trailing one year. 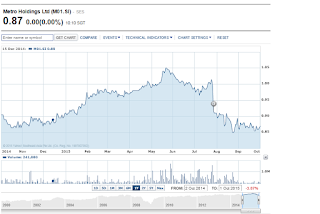 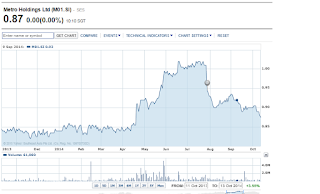 You might say, what is the similarity, because the charts look different, well yes and no.

They are similar as the trend is broadly up from Oct to Jun/Jul and then it crashes down. 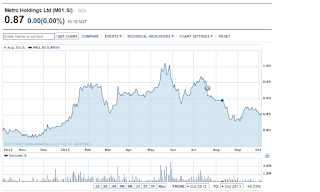 The answer is a resounding yes.

It is either fast and furious or slow and steady, but history suggests that it will crash to at best a low of between 0.8 - 0.85 cents in the rest of the year and rise to around 1 by Jul 2016.

The trading idea is

a) Buy if and when when it falls to below 85 cents before end Nov.
b) Sell when it reaches $1.

Without trading friction, that is a return of 18% for a holding period of around 8 months.

Full Disclosure : I intend to buy a position in Metro when it hits below 85 cents and will likely trade out when it hits $1.

I am not an investment professional.

I encourage you to do your own independent "due diligence" on any idea that I write about, because I could be and probably am wrong.

Nothing written here is an invitation to buy or sell any particular stock.

At most, I am handing out an educated guess as to what the markets may do.

The market will always find a new way to make a fool out of me (and maybe, even you!).

Even the best strategies of the past fail, sometimes spectacularly, when you least expect it.

I am not immune to that, so please understand that any past success of mine will probably be followed by failures
Posted by Vatsa at 7:46 PM